1. If the masses of both the bodies, as shown in the below figure, are doubled, then the acceleration in the string will be

3. The centre of gravity of a hemisphere lies at a distance of 3r / 8 from its base measured along the vertical radius.

A. Correct
B. Incorrect 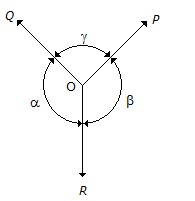 The above figure shows the three coplanar forces P, Q and R acting at a point O. If these forces are in equilibrium, then 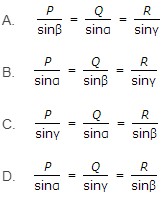 5. Moment of inertia of a rectangular section having width (b) and depth (d) about an axis passing through its C.G. and parallel to the depth (d), is

A. Correct
B. Incorrect

8. The velocity of a particle (v) moving with simple harmonic motion, at any instant is given by(where r = Amplitude of motion, and y = Displacement of the particle from mean position.)

9. Varingon’s theorem of moments states that if a number of coplanar forces acting on a particle are in equilibrium, then

Correct Answer: D. the algebraic sum of their moments about any point is equal to the moment of their resultant force about the same point.

10. A block of mass 20 kg lying on a rough horizontal plane is connected by a light string passing over a smooth pulley to another mass 5 kg, which can move freely in the Vertical direction, as shown in the below figure. The tension in the string will __________ with the increase in the coefficient of friction.

A. increase
B. decrease
C. not be affected