11. Which of the following statement is correct?

Correct Answer: A. The periodic time of a particle moving with simple harmonic motion is the time taken by a particle for one complete oscillation.

12. When the speed of the engine fluctuates continuously above and below the mean speed, the governor is said to be

13. When two pulleys of different diameters are connected by means of an open belt, the angle of contact at the __________ pulley must be taken into consideration.

A. smaller
B. larger

14. The maximum frictional force, which comes into play, when a body just begins to slide over the surface of the other body, is known as

15. In a four-stroke I.C. engine, the turning moment during the compression stroke is

Correct Answer: B. negative throughout

16. A body will begin to move down an inclined plane if the angle of inclination of the plane is __________ the angle of friction.

A. equal to
B. less than
C. greater than

17. The fundamental equation for correct steering is (where φ and α = Angle through which the axis of the outer wheel and inner wheel turns respectively, c = Distance between the pivots of the front axles, and d = Wheelbase) 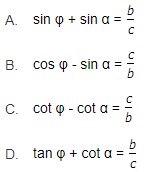 18. The height of a Watt’s governor is

19. A rotor supported at A and B carries two masses as shown in the below figure. The rotor is 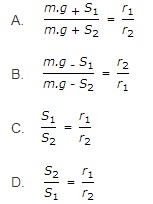