41. The ideal angle of banking provided on the curves on roads depends upon

Correct Answer: B. (velocity)2 of the vehicle

43. The moment of inertia of a thin disc of mass m and radius r, about an axis through its centre of gravity and perpendicular to the plane of the disc is

44. The linear velocity of a body rotating at ω rad / s along a circular path of radius r is given by

45. A machine which is capable of doing work in the reversed direction, after the effort is removed, is called a non-reversible machine.

Correct Answer: B. No

46. The forces which do not meet at one point and their lines of action do not lie on the same plane are known as

Correct Answer: D. none of these

47. A non-reversible machine is also called a self-locking machine.

49. Moment of inertia of a hollow rectangular section as shown in the below figure about Y–Y axis is not the same as that about X–X axis. 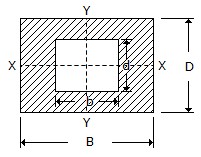 50. The angle of the inclined plane at which a body just begins to slide down the plane is called helix angle.